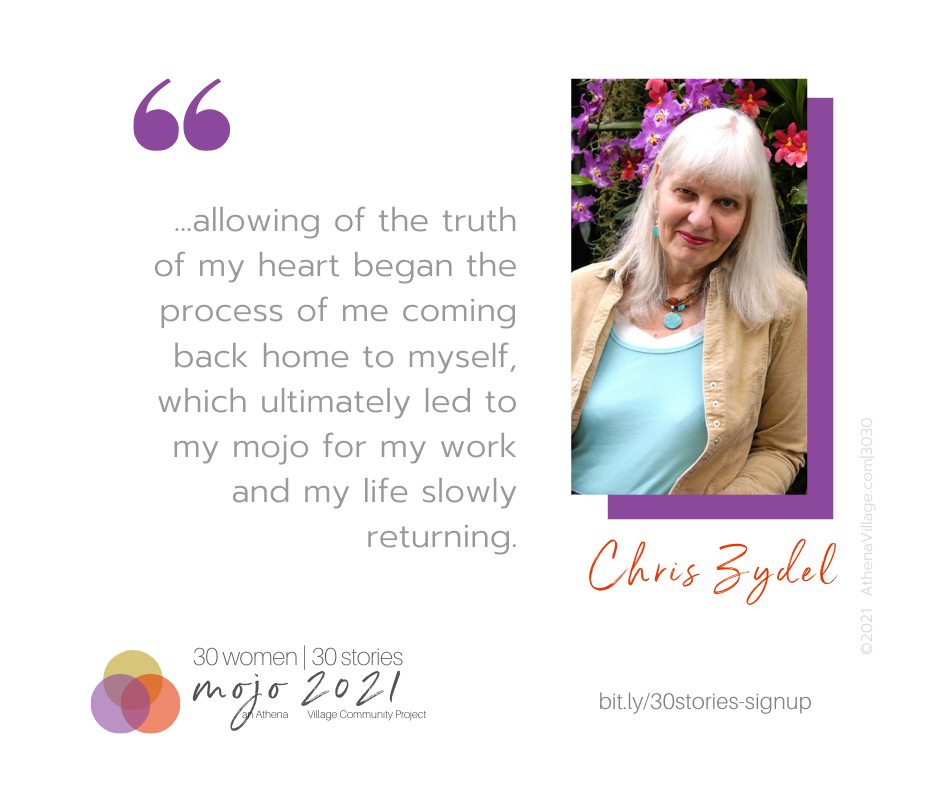 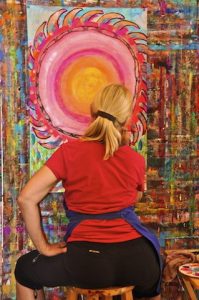 I am an expressive arts facilitator, teacher, leader and guide and use the power of the intuitive painting process in healing community circles to help people connect with and reclaim their true and authentic selves. I have been wondrously blessed to have found work that I love, that is profoundly meaningful and that aligns with who I am at my most essential, core level. I know that this is something many people struggle to find, so not a day goes by that I don’t feel gratitude for this great good fortune.

My work is a core part of my identity and is also deeply connected to my mojo. So when something challenges my relationship to my work it throws off my mojo balance in a big way. 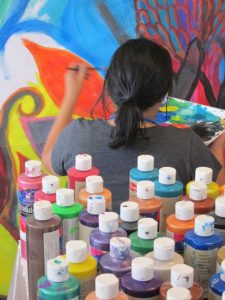 Most of my work is done in groups and prior to the pandemic I delivered my work live and in person through classes, workshops, retreats and training programs. I love the energy that gets created when you bring a group of people together in a sacred circle, build an art studio where they can express themselves with total freedom and create a non judgmental container where they can feel encouraged and celebrated to explore every aspect of their soul and psyche in a safe and supportive community.

I’m also a not-so-secret mystic. And my mojo is powerfully fueled by spending time in spacious, majestic natural environments like the mountains, the red rock desert or the ocean shore.

So early on I came across the genius idea to bring these two mojo building activities together by offering expressive arts intuitive painting retreats in gorgeous and spiritually nourishing nature settings.

In order for this genius idea to work I needed to find existing retreat centers that allowed me to create art studios where I could build a space to house the messy and gratifying work of healing with paint, and tears and joy and love.

Over the span of almost 20 years I found three retreat centers that fit the bill beautifully… one in the wilds of New Mexico, one in the ancient redwood forests of coastal California and one in the High Sierra California mountain range. I essentially lived my life on retreat spending almost 4 months out of any given year traveling to and then living in these beautiful places with groups of 15-20 creatively intrepid souls who joined me for these healing adventures. It was glorious. And I was totally in my element. 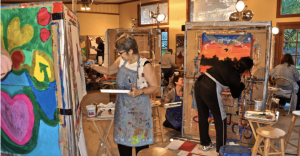 As time went on I formed incredibly deep bonds with the land, the retreat centers themselves and with the people who ran them, returning again and again and again over the years. These places each became a creative home that claimed and held a piece of my heart and my soul, and were inextricably bound to how I did my sacred healing work.

However, in September of 2017 when I was on retreat in New Mexico, it became abundantly and shockingly clear that I could no longer continue to be in partnership with that particular place. There were some weird financial shenanigans and increasingly unbearably chaotic mismanagement with the retreat center itself and the separate space where I stored my easels and art supplies in between workshops was no longer available. So I had to make the heartbreaking decision to say goodbye to this place that I loved and that had served me so well for 18 years.

And then.. even more shockingly… only three weeks later my second beloved retreat center that was nestled in the California redwoods burned to the ground in a devastating wildfire.

In a matter of weeks, my whole world turned upside down.

It was a very disorienting and devastating time because even though my actual home was still totally intact these two primary creative homes were now gone, and I felt spiritually homeless.

I didn’t even have time to grieve, since I had another seven retreats on the books for the coming year, with the next one scheduled in a matter of weeks, which meant I had to act––and act quickly. 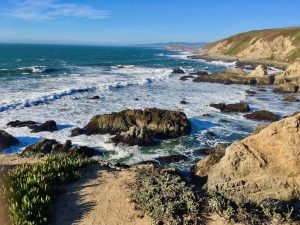 My angels were looking out for me as I miraculously got a call within days of the fire from one of my long-time students letting me know that she had an amazing place I could use as a retreat center located on a bluff overlooking the ocean on the California coast. It was such an incredible act of generosity and it meant among other things that I didn’t even have to deal with the anxiety of looking for a new space.

But as lucky as I knew I was, I felt numb and disconnected and like I was just going through the motions of my life. My mojo had gone up in smoke, like the retreat center lost to the fire.

This magical work that had always fed my soul was shrouded by a grief I could not allow myself to feel.

Part of it was that it “didn’t make sense.” I hadn’t lost my actual home and I was effortlessly gifted this beautiful NEW retreat center that was more incredible on so many levels than I could have ever imagined. And part of it was that I just didn’t want to admit how much those two places I had lost had meant to me.

So I attempted to reason with my heart, trying to convince her that we had every reason to be joyful. But she wasn’t having ANY of it, and kept pulling me down into the netherland of my own personal underworld until I was willing to acknowledge the depth of my loss. I fought it for a while longer and then one day just surrendered to the magnitude of my grief, allowing my sobbing heart to break open in a million pieces and a flood of tears and wailing that went on for a very long time.

Of course, I needed to cry more than once. But that first allowing of the truth of my heart began the process of me coming back home to myself, which ultimately led to my mojo for my work and my life slowly returning.

It was a humbling moment of being confronted with the idea that you teach what you most need to learn…since I am ALWAYS telling my students how important it is for them to trust in their feelings.

But it was also a reminder that my mojo is deeply connected to my ability to love.

That loving something or someone always means that we will experience the loss of what we love somewhere along the way. And that keeping our hearts open to wherever that journey into love takes us is the only way to stay fully alive. 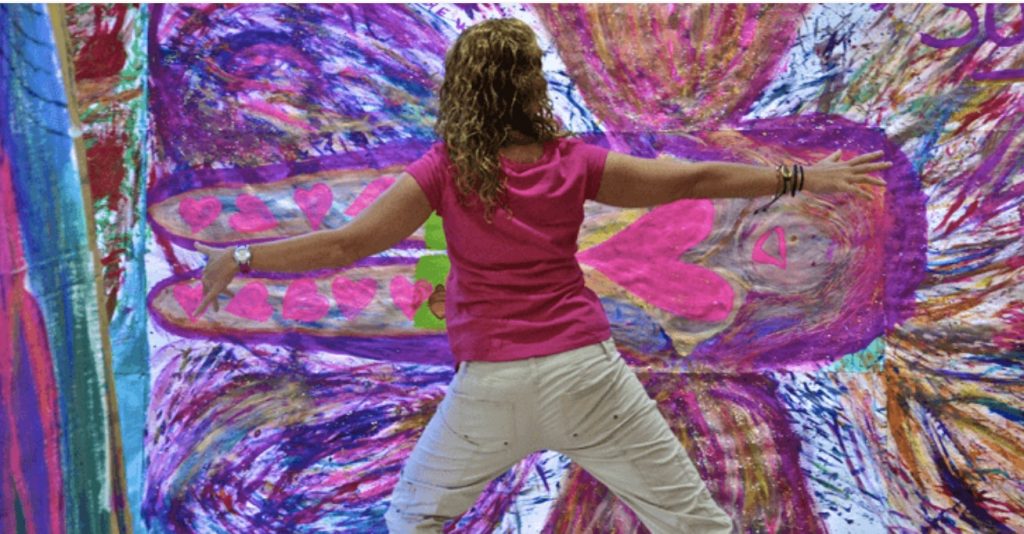 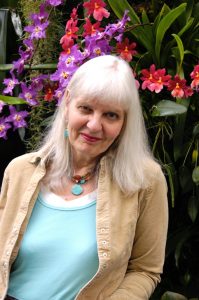 Chris Zydel, MA also known as the Wild Heart Queen, is head creative goddess at Creative Juices Arts. She has over 40 years of experience as a compassionate creativity guide and an unshakeable faith in the power of creativity to heal hearts and change lives. She knows deep in her bones that everyone is deeply, wonderfully and gloriously creative and is on a relentlessly love-soaked mission to prove that to the world. She performs this magic by providing nurturing and joy-filled creative sanctuaries overflowing with encouragement, permission and trust in the sacred energy of play and creativity that lives inside of us all. 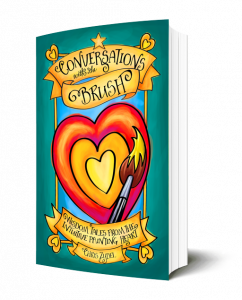 Chris just released her book: Conversations with the Brush: Wisdom Tales from the Intuitive Painting Heart

Conversations with the Brush is a wildly entertaining and inspirational journey into examining the question of how to become more creatively open and alive using intuitive painting and the expressive arts.

I wrote this book because I wanted to introduce as many folks as possible to the idea that we are ALL naturally wildly creative and that what stops our creative flow dead in its tracks are things like judgment, perfectionism, comparison, self-doubt, fear, unrealistic expectations, not trusting our intuition and limiting cultural beliefs around what it means to be a creative being. – Chris

Where to Find Chris 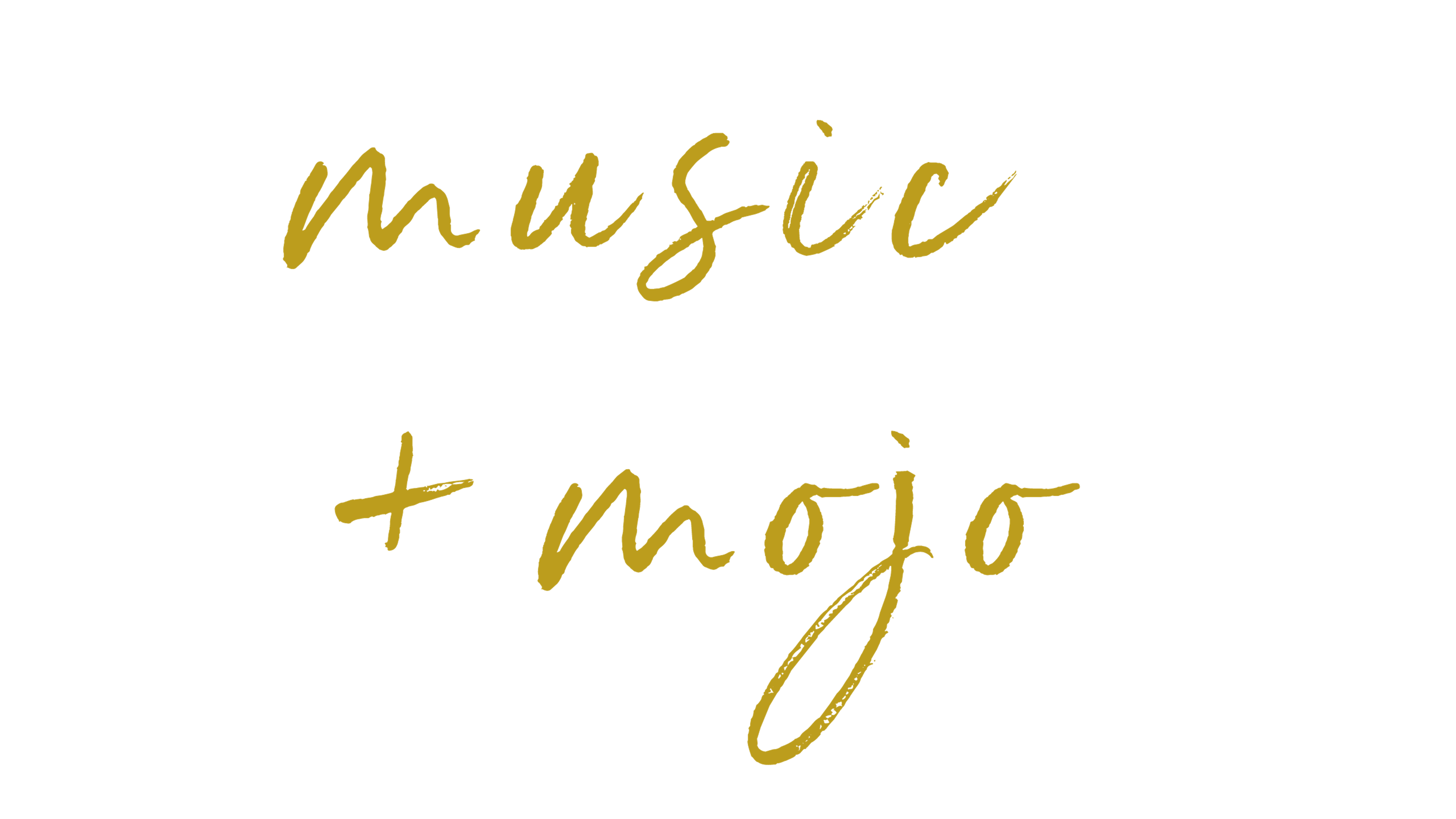