Giving Circle?? 💡 idea for the Village? 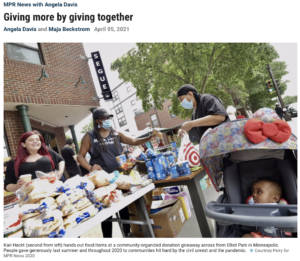 Americans gave away more money in 2020 than 2019 driven by the needs of the pandemic and renewed interest in racial justice following George Floyd’s death. The uptick was largely credited to individuals making small contributions. Many of us think about foundations when we think of philanthropy. But nationally and in Minnesota, individuals give two-thirds of all funds for causes and nonprofits. Some of that money flows through giving circles, groups formed by ordinary people…
[Read More in Data isn’t a four-letter word with Devon]